This blog has now moved to dreurovision.com where is has been integrated into the main website. After three years I thought it was time to give the site a bit of a facelift. I'm really grateful to my friend Dan who along with my brother-in-law, Phil, helped set up the original page.

So to read all my musings from now on, head over to the main site and click on Blog!

Thanks for reading and happy Eurovision!

A pal of mine from OGAE UK Emily Roberts, a bit of a musical star, is heading to Vienna and is hoping to give a street performance of several Eurovision songs. Does anyone know where we might get a piano or at least a keyboard? Random request I know!
Posted by Dr Eurovision at 06:17 No comments:


Ladies and gentlemen, I think we might have just seen the winner of Eurovision 2015; Sweden!

Last weekend I went along to the Duke of York pub in central London where Sweden's selection show for Eurovision, Melodifestivalen, was being shown. What an atmosphere, the pub was absolutely packed. The Swedes really do know how to stage a thoroughly entertaining TV show and the production values of MF are almost as good, if not better, than the ESC itself. Bravo SVT!

During the evening I got chatting to a bunch of Swedes who were on holiday in London and were loving the enthusiasm that the crowd had for their national selection. One of the girls even told me that she was in the audience for Eurovision 1985 and recalled how the audience were shocked when the presenter's skirt was pulled off since they didn't realise it was a stunt! All in all, a lovely night with lovely people.

Back to the music, whilst Sweden's "Heroes" isn't the best song they've sent, it's so effectively staged and in a rather mediocre year, I think it's going to take something very special to beat it. Looks like an expensive Eurovision again next year... 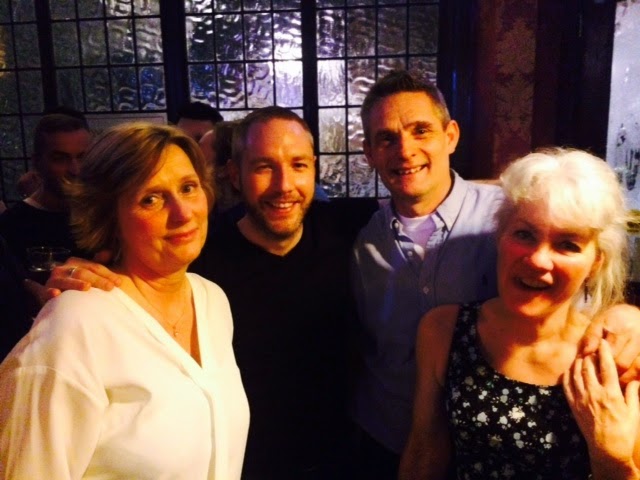 Some thoughts on the UK entry for 2015

Well the BBC has finally revealed who is representing the UK at Eurovision in Vienna. Alexandra Burke? Lulu? Kylie? Er, no.

It's fair to say that Electro Velvet has received mixed reactions from fans with many loving it and others absolutely hating it. That's Eurovision for you!

The Charleston vibe isn't really my thing but I do quite like this, it's quirky and different. In a year where most of the songs chosen have been a bit of a snoozefest, this stands out. Saying that, I don't know if it will woo the voters. The key is how it'll be staged - with a maximum of six people on stage it won't have the impressive impact of the video. Then there's the slightly trickier issue of the live performance - can they pull it off?

What struck me has been the vitriol directed towards the BBC, Electro Velvet and even some huffy tweets directed at me. If I didn't like the entry I would say so. It's not my favourite but we've sent worse. I imagine it'll come across as fun on the night.

There is a question here about how the UK act is chosen and that's something the BBC should review. I do think we need to be bolder and send more daring choices or even something which is more reflective of the UK music scene.

The UK song might not be everyone's cup of tea but I think a sense of perspective is needed. If another country had entered this song I doubt the criticism would be as prominent. I've said it before and I'll say it again, Eurovision is a TV show, it's not for the fans. It's harsh but true and time we all accepted that.

The BBC have got it wrong in the past. I can understand disappointment and wanting to rally behind the UK entry. I'm a Eurovision fan, unashamedly so, but the fan community also does itself no favours. There's a slightly manic element of our community which leaves me a little uncomfortable - as highlighted in Roy Delaney's excellent article on ESC Insight. When people are dropping the c-bomb on public forums, over a difference of opinion in music, it's time for a reality check.

Now, where did I leave my dancing shoes?
Posted by Dr Eurovision at 05:20 3 comments:

Every day is a school day...

I'm delighted to have been offered the opportunity to run a short course on Eurovision at City Lit in London in March. The course will chart the highs and lows of 60 years of Eurovision and will begin on Sunday 15 March from 14:00-17:00. It will take place each Sunday until 29 March.

Specific topics that will be covered:

More details can be found here - go on, sign up! There might even be a special guest from Eurovision itself...
Posted by Dr Eurovision at 00:57 3 comments:


This is one of the more surreal blogs I've posted...

Australians have been loyal and enthusiastic fans of Eurovision over the years and this year it seems that the EBU is rewarding them for their unwavering support. Australia, yes AUSTRALIA have been invited to enter the Eurovision Song Contest!

It might seem a little ridiculous at first but Eurovision already has entrants which lie outwith the conventional borders of Europe; Azerbaijan and Israel. In 1980 Morocco entered and there were plans for Tunisia and Lebanon to take to the stage once upon a time.

Whilst many say that political tensions come to the foreground when it comes to Eurovision, I think it unites us. Having a country over the other side of the world take part is entirely in-keeping with the general ethos of the competition. Eurovision is huge down under, 3 million people watched the show last year. With so many European expats (and those Aussies of European descent) it makes sense for Australia to be invited to the party. The more the merrier I say!

In the press release Executive Supervisor of the ESC, Jon Ola Sand said “At the very heart of the Eurovision Song Contest is the importance of bringing countries together to celebrate diversity, music and culture. We have admired and respected SBS’s support of Eurovision for many years now and wanted to extend the invitation for Australia to join us in this special 60th Anniversary of the Contest. It would be remiss of us to throw the world’s biggest party and not invite our Australian friends, who have such a long history and connection with Eurovision” - couldn't agree more Jon Ola!

This isn't the first time that Australia has featured in Eurovision; practically every year the presenters make reference to those watching Down Under. In 2013 a tribute to Australia's love of the contest was shown during the semi finals, and Australian singer Jessica Mauboy performed as the interval act in the second semi final in 2014. Australian singers have participated for other countries in the Eurovision Song Contest in the past including Olivia Newton John and Gina G for the UK and Jane Comerford who was part of Germany’s 2006 entrants Texas Lightning.

It'll be typical, Australia will enter for a bit of fun and probably win the damn thing! Should Australia win the contest it has been agreed that the broadcaster, SBS, will co-host the contest in a European city with another EBU member - a chance for the BBC to show off its technical skills perhaps?

Posted by Dr Eurovision at 09:00 No comments:

It's now been confirmed that the BBC will mark the 60th Eurovision Song Contest by hosting a "Eurovision Greatest Hits" show at the Hammersmith Apollo in London on 31 March (it was reported that it would be in the Albert Hall - remember that Wikipedia isn't to be trusted!) Whilst some fans have expressed disappointment at it not being live show, and about the size of the venue, I think this is great news. The BBC might not have always got it right when it comes to Eurovision, but they're a world-class broadcaster. In terms of production values, the 1998 contest, the most recent Eurovision that the BBC hosted, was ground-breaking and I'm certain that we are going to have a spectacular show on the night.

The European Broadcasting Union is also arranging a 60th anniversary conference which will take place in London in April. I'm delighted to be speaking at this event and will present an overview of some of my research. More details here. About ten years ago I was practically laughed out the room when I asked a question about Eurovision at an academic conference, how times have changed...

This Saturday sees the Melodifestivalen kick off in Sweden, the firm fan favourite and most popular of all national final formats. Of course this also means that various rumours have begun to circulate about the UK entry for Vienna. Last month I filmed a documentary on Eurovision for BBC Four, and whilst the team did not disclose any specific information about the UK entry for 2015, they did say that the deal with the act was nearly complete. Good things come to those who wait...